Mio Isurugi (石動 美緒 Isurugi Mio) is the leader of the 2nd Volunteering Club and the senior of Tarō Sado. She is the head of his school club and is violent to Taro due to her superiority complex. She is shown to be very athletic, but it has been said by Arashiko Yuno to not be very good at studies. There is an implication that she has feelings for Taro (as a result of his kindness towards her, plus the fact that he treats her just as he does with everybody else), although she does not admit it. It is suggested that she became jealous when another girl makes advances towards Taro, as in the case of her being more violent when Noa Hiiragi gave him a mound of lilacs. She seems to be unaware of the fact that she has developed an attachment towards Taro, nor the fact that she has unconsciously developed feelings towards him, and constantly denies these facts whenever Arashiko has pointed it out. Her first kiss was with Taro. 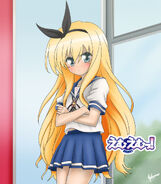 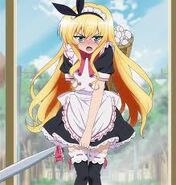 Add a photo to this gallery
Retrieved from "https://animemm.fandom.com/wiki/Mio_Isurugi?oldid=4403"
Community content is available under CC-BY-SA unless otherwise noted.